The final 2021 meeting of the Oxford Interfaith Forum Discussion Series featured a discussion about The Festival of Light. We opened our program with recognition of Senior Scholar Rvd. Dr. John Goldingay, who, along with his wife, Kathleen Scott Goldingay, suffered a significant loss this year when Kathleen’s daughter died tragically in an automobile crash. We held two minutes of silence for the loss of Katie-Jay Scott Stauring and her husband, Gabriel Stauring. We were joined by representatives from many organizations around the world whose good work was helped and whose lives were touched by the service of Katie-Jay and Gabriel, including iAct, which Katie-Jay and Gabriel founded to give aid and voice to refugees, Jewish World Watch, Archdiocese of Los Angeles, UNHCR, UNICEF, Never Again Coalition, Sudan Unlimited, The Clooney Foundation for Justice, The Sentry, and Fuller Theological Seminary.

Bishop Gorick, who closed our silent reflection with a beautiful prayer for peace upon all who mourn, also gave a beautiful welcome address for our discussion. He spoke particularly about the radiant brightness of light that shines, reflects, and brightens our lives during the darkest seasons. So, in light of the holiday season and the shortened winter days that carry all the perils of darkness, we pause to reflect on the meaning of light.

Dr. Jesse Abelman opened the discussion by presenting the Jewish perspective of the Festival of Lights as it is commemorated in Jewish tradition, more widely known as Hanukkah. Across eight days, eight candles are lit progressively every night to remember an historical event in Jewish history when the Maccabees revolted against governing authorities who sought to destroy their Temple, and their faithfulness was rewarded with the miracle of lasting oil, keeping the Menorah burning solid and bright through eight nights.

Hanukkah does not celebrate an event recorded in the Torah, yet it still offers a critical reflection on the survival of the Jews and a miraculous event in their history. Dr. Abelman’s presentation focused on rabbinical awareness of the Maccabee’s revolt, the miracle of lasting oil, and the celebration of the Festival of Light as foretold in the Torah. The rabbinical commentary reflects on the Festival of Lights in such a way that ties its origins to the Torah to increase the credibility and validity of the celebration. Below are a few examples of how different rabbis envisioned the Festival of Lights.

Pesikta Rabbati wrote about how Hanukkah (which means, in Hebrew, “dedication”) commemorates the Hasmonean dedication of the Temple in light of their defeat of the Greeks who governed them. He aligns this victory with the description in Numbers 7.24 of the Tabernacle’s completion in the desert and the completion of the Temple in 1 Kgs. 8.63. A meaningful ceremony recognizes the dedication of these religious structures. Pesikta Rabbati explains that these are Torah-echoes of the commemoration celebrated in the Hasmonean victory.

The Midrash Leqah points to Lev. 24.2, where Moses brings an oil of beaten olives for the lighting of the Temple Menorah. This is an historic precedent for the lighting of the Menorah, which was miraculously preserved in the time of the Maccabean revolt. The author argues that Lev. 24.2 may be seen as a prophetic text about establishing a holiday regarding the matter of oil, which is fulfilled in Hanukkah.

Yakut Shimoni R. Hanina ties the holiday of Hanukkah to Exodus 40.2, which recognizes that the Temple was completed on 25 Kislev. Still, the celebration was held off to align with Isaac’s birth (Gen. 18.6), which is 1 Nisan. Therefore, he argues, 25 Kislev, having been overlooked in earlier times, was preserved for another celebration, which fits as a kind of prophecy for Hanukkah. Moreover, this explanation demonstrates a Torah connection with the celebration of the much later Maccabean revolt.

Talmud Bavli Avodah Zarah taught that in the beginning, in the first cycle of annual seasons, the first human saw darkness set in the winter months. He then set aside eight days, which he devoted to fasting and prayer for the night to end and a return of light to the world. Then came Tevet (~January), and the days again grew longer. So, every year, from the first, eight days have been set aside as dedicated to God. The Maccabean victory and the celebration of the Festival of Light affirm this tradition.

The latter ties the tradition to age-old solstice traditions, where human cultures worldwide seek to light the darkness and usher in a time of spring and summer. Many historical traditions celebrate light in the darkest months of the year. Finally, Hanukkah ties this season and practice to a specific religious victory as a celebration of God’s miraculous protection.

Dr. Gibbons followed with a Christian perspective of the Maccabean revolt and the Festival of Light. The origins of a winter celebration for Christians begins with the biblical recognition of King David, who hid away the sacred Ark of the Covenant in the Temple announcing that a time would come in the future to celebrate the ark in worship to God, which he shared as a prophecy about the Theotokos, the “God-bringer,” Mary, the Mother of God, who is called the ‘new ark,’ as she bears in her womb the Christ.

However, for the first three centuries, Christians did not celebrate Christmas as it is today. They celebrated a Festival of Light so that Christ’s coming was seen as a light, a model of resurrection from the dead. The ancient Christian celebration is better connected with global solstice traditions that light the way of darkness. Dr. Gibbons mentioned the roots of Christian solstice traditions in Zoroastrianism. The feast of the Magi, for example, celebrates the Astrologers, whose religion was likely from the eastern Zoroastrian traditions. Other ‘pagan’ cultures recognize the deep darkness in the winter as an agricultural cycle, where the earth is a womb, an ‘ark,’ like Mary’s, waiting to spring forth light.

An icon of Mary, called “Mary of the Burning Bush,” tells the story of the coming Christ as the light that springs from Mary. In honor of the life-to-come, people light the darkness with all kinds of feasts and celebrations. The lighting of candles in the darkest, shortest days of winter unites religious traditions globally.

For Christians, the Festival of Lights centers on recognizing the coming of divine light into the world. Christ is the holy one, who can be represented by light. Those who represent Christian ways of life and service are icons, images, who refract the light that comes from the Holy One. Lighting candles reminds humanity of her role in reflecting the light and beauty of God’s grace.

The Maccabean tradition also appears in early Eastern Orthodox Christian celebrations. The seven Maccabean brothers and their mother are venerated in Christian tradition as martyrs whose life of faith demonstrates faithfulness. The mother is recorded as saying to her last son “I do not know how you came into being in my womb. It was not I who gave you life and breath … therefore the Giver of Life …. will in his mercy bring life and breath back to you … .” This confirmation is recognized by Augustine, John Chrysostom, and other early Christian elders who refer to the Maccabee’s enlightenment by the spirit so that we might be enlightened by them. Though these stories are Jewish stories, they have worked their way into Christian traditions. Christian communities celebrate the feast of the Maccabees on 7 August. Dr. Gibbons described this as a recognition of Christianity’s ‘mother religion,’ a sign of the very deep connection between Christianity and Judaism.

Today, Christmas is the Feast of Candlemas where believers light candles on each of four Sundays leading up to Christmas, called the Advent. The images of Christmas draw from the Hebrew Bible prophet Isaiah, acknowledging that even the ox and ass know their maker. Creation is enlightened before humans. Christmas is a revelation to gentiles, shepherds, rough people, by means of a bright, shining star, which points the way to a greater light. The greater light is a theophany (manifestation of God), epiphany (manifestation of Christ), and the giving of precious gifts when the child is found. The song echoes through all creation—”Glory to God in the highest and peace to God, the restoration, the friendship of God to us.” God is the true light, which is found in ourselves.

Some immediate discussion began with exploring connections in Genesis with God’s creation of light. Dr. Abelman pointed out the 11th Century rabbinical writer known as Rashi emphasized the significance of the design of light not as literal sunlight but as a symbolic light—the light of the righteous. This understanding reflects Jewish traditions of the Festival of Light which illuminates righteousness, justice, and advocacy for those in need. Dr. Gibbons added by explaining the Christian emphasis on the indwelling of light within each person in creation. Dr. Garrick connected this to the implication of light in the Big Bang theory, in which physicists describe the energy that ripples on the surface of space and time. The latter corresponds with Genesis, in which the spirit of God hovers above the primordial waters (Gen. 1.2).

In Christianity, light is often used as a representation in several feasts, but not in standing in for the Temple, as in Judaism. Instead, in a manner of representing God’s light. In Judaism, different elements of the Temple, including the Menorah, the shewbread, etc., are used in the home to convey the significance of God’s presence in Shabbat. Both traditions draw upon imagery and symbolism to recognize the presence of God in everyday life.

Overall, the connection between love and light is ubiquitous. The intensity of light in the darkness represents the intensity of God’s love. Therefore, scripture says, “perfect love drives out all fear,” just as the light drives away the darkness. Any tradition that recognizes the power of light to drive away darkness and usher again an emerging season of light also recognizes the ineffable ability of God’s love to drive away all that brings fear and destruction. The Festival of Lights in Christmas, Hanukkah, and Winter Solstice invites enlightenment of the soul, asking each one who sees the flame to accept perfect love that casts out fear. 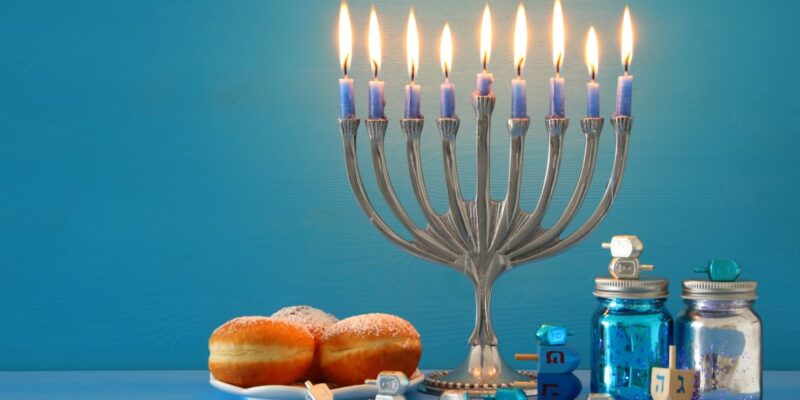 December 14, 2021 Leave a comment
Hanukkah is not a Type of Christmas 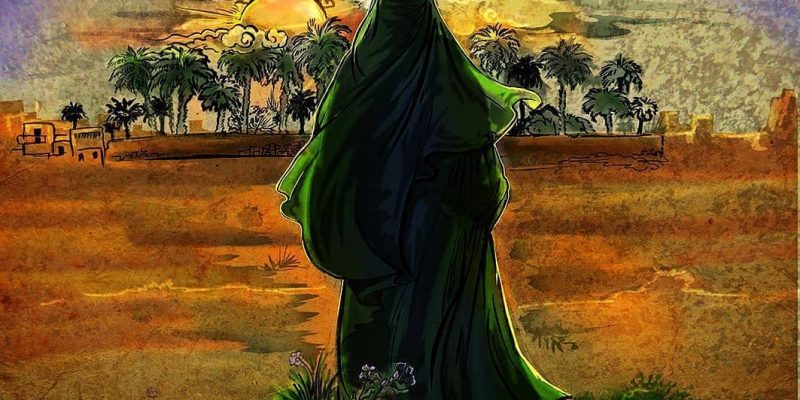 October 13, 2021 1 Comment
Interfaith Discussion about Abraham and His Family