Read or Listen to the Blogcast

One of Octavia Butler‘s first novels has been recently made into a graphic novel. Kindred is a twentieth-century novel that explores the intersections of mid-twentieth century life for an African American woman living in Los Angeles with the life of her ancestors in nineteenth-century Maryland.

The protagonist, Dana, is a liminal character. She is moved by forces beyond her control from a present reality where she is just achieving some pretty significant milestones in her adult life to the home of her ancestors in early nineteenth-century Maryland. In her 1976 present, Dana barely became a published author, married, and moved into better housing. She is unexpectedly transported to 1818, where she rescues a young boy from drowning, and it soon becomes clear to her that she is drawn back in time, again and again, to rescue her white, slave-owning ancestor from death.

Butler does not give us a story of how and why time travel happens; she gives a story about a character who is affected emotionally and physically by her exposure to the violent past of her ancestors, as well as her own experience as a slave on an insignificant plantation in the antebellum south. Dana often introspects in the novel about how she feels like an observer and participant in the out-of-time scenario. She is surprised and even judges herself a little by how she seems to settle into slave life on a day-to-day basis. Her perspective is troublesome for the reader. I am angry and disturbed on her behalf and also grateful when she finds a way to become invisible so that she is not in harm’s way.

The liminality of Dana’s character is really intriguing in the novel. Dana describes her modern life at one point. She worked in the present as a day laborer, making just enough money each day to provide room and board to pursue her dream of being an author. She noted that the day laborer was termed slavery in casual conversation. Dana meets her husband, also an author, at a job during this time. They are an interracial couple who have sincere, egalitarian love for each other. There is hardly any explicit political commentary on interracial relationships in Butler’s narrative. But, it is an unspoken irony when we meet Dana’s ancestors, a white slave-owner named Rufus and a once-free black woman named Alice. Each time that Dana travels back in time, she is forced to deal with this reality. She is extremely aware of the behaviors she adopts to stay safe and to keep her ancestors safe. At the same time, she criticizes herself regularly for easing into the slave life on the plantation.

Of the two forms of Kindred, the full novel is by far my favorite. Dana’s introspective commentary on time travel and power dynamics is brilliant and profound. However, the Graphic Novel (GN) format drew my notice to a few things that had not stood out so much in the novel. One is Dana’s marriage to a white man. The novel describes the emotional and relational quality of Dana’s and Kevin’s relationship before revealing the racial quality of their marriage. In the GN, it is apparent right away. The racial themes are explicit and apparent, especially when Dana first travels through time to save a young Rufus and is confronted as a run-away slave. The other physical obscurity that was made explicit in the GN was gender perception. Each time Dana travels back in time, the characters comment about her looking like a man because she wears trousers rather than a dress. This image builds for the novel’s reader through small comments made by various characters in the narrative. In the GN, Dana is drawn in a masculine form, her hair very short and wearing trousers with a button-up shirt. This was intentional, noted by the GN adapters/authors who wanted to draw attention to the gender ambiguity between Dana’s dress and the cultural perception of early 19th Century denizens. The third thing that stood out so clearly in the GN was how small her ancestors’ plantation was. Dana threw out a comment in the novel about how she and Kevin could have afforded a house of the same size in Pasadena, even on their small income. In the GN, the regular-ness of the plantation house was striking since I am accustomed to thinking that only masters of mansions owned slaves in the south. This detail drew attention to the vast power differential in the antebellum south, which primarily hinged on skin color. But there are other stereotypes at play in the novel.

Dana does her best to fit in and keep herself safe and keep safe the people she cares about. But, she is a writer, and her strength is intellectual, not necessarily physical (although she is a little bit of a bad-ass). She offends both whites and blacks on the plantation by “talking white.” The slaves think she sees herself as better than she is, and the plantation Master thinks she is rising above her station in a way that mocks him. Butler draws attention to the literacy divide between whites and blacks in the antebellum south. The master believes that slaves may begin to think about freedom if they are taught to read and write. One of the slaves commented on this, “as if we needed someone to tell us about freedom.”

Literacy as access to power is a major theme in Butler’s Kindred. Dana and Kevin are both paid authors. They met and bonded over their “struggling artist” experience. When Kevin is trapped in the past, he is a tutor for a short time, and Dana defies the master’s orders several times, and she secretly teaches some of the slaves to read and write. There is a running commentary about how adept the black children are in reading and writing. While, at the same time, Rufus, Dana’s ancestor as well as the Master’s heir, refuses every opportunity to become better educated. Access to education and literacy is still a major problem in many parts of the world today. Even though Butler shows the drastic difference between black slaves and white property owners, in the past, her attention to this particular detail is relevant to modern discussions about access to quality education even in the United States. Butler’s narrative draws attention to the astonishing fact that this lifestyle is only one century early than Dana’s present reality in the late twentieth century.

I am engaging with Butler’s fiction as a fan, recognizing that I cannot know exactly what she meant to portray, nor can I fully identify with the author’s experience as a black woman in the twentieth century. However, one thing I have in common with the author is that we were both raised by parents who were Christian ministers. I hope this commentary inspires you to read Octavia Butler’s writing for yourself. I know it will encourage some deep thoughts about identity and access to power from the margins.

If you enjoyed this post and would like to discover more of Octavia Butler’s books, take a look at my blog post on the Parable books. 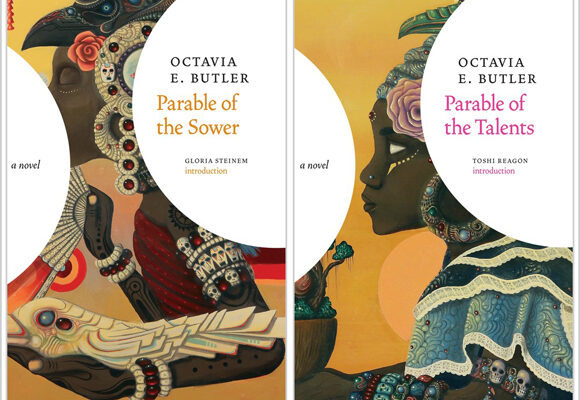