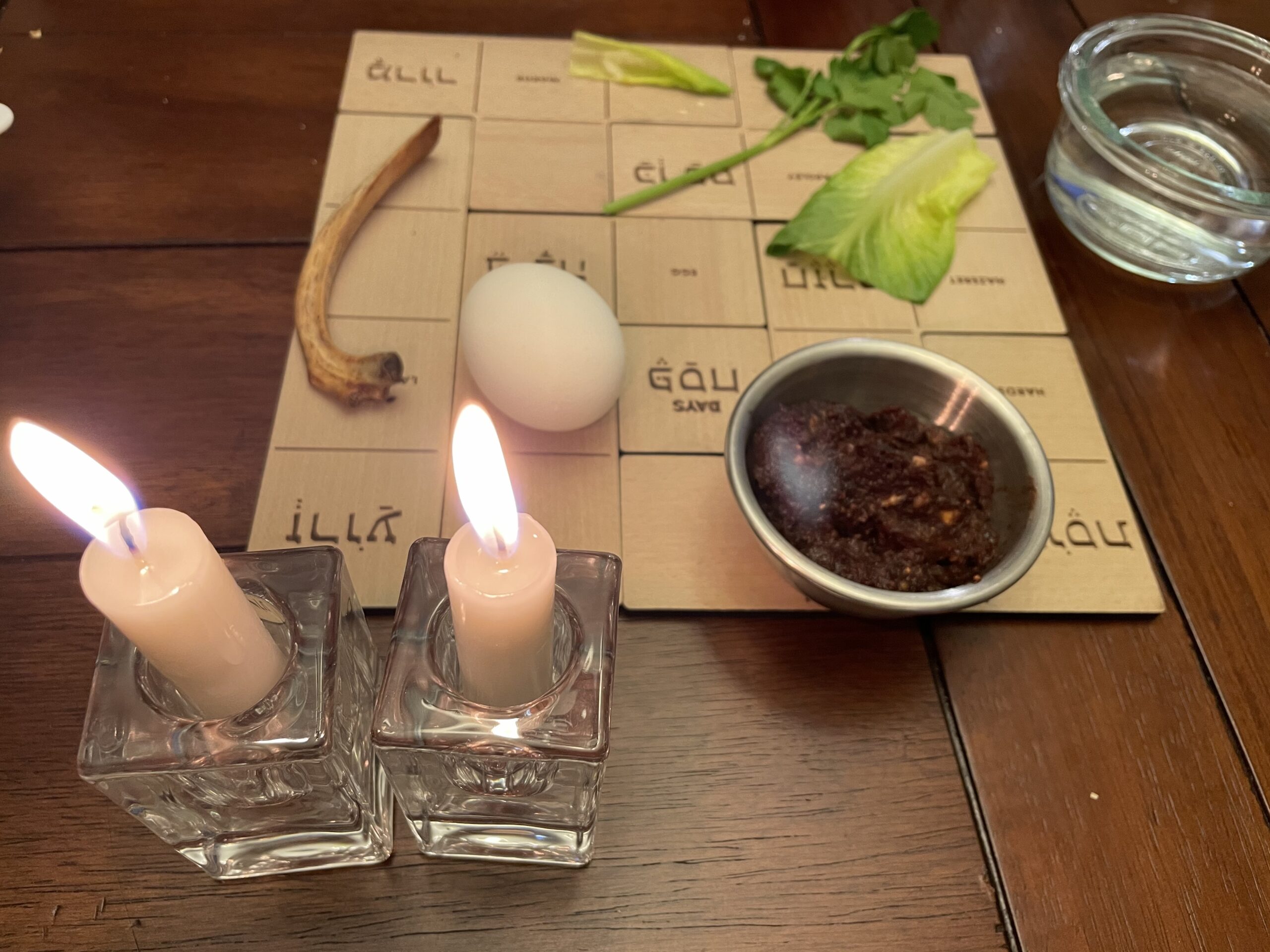 On Friday evening, our family celebrated our first Passover Seder in our home. We blocked a few hours on the calendar to dedicate to preparing food, setting the table, and enjoying some pre-dinner Passover drinks (which is apparently, a thing). My daughter helped me make coconut macaroons dipped in chocolate, which was so incredibly easy!

In the morning, we discarded all remaining leavened bread from the kitchen. It wasn’t much and we were able to compost it, so we prayed for blessing and also forgiveness, not wanting to be unnecessarily wasteful. We did our best to keep kosher wherever possible. It was difficult to figure out what to do and when … in these matters, our effort has to count for something. We went about our Friday as usual, though it being a special day in the Christian tradition, my partner and I walked to a local church for the noon-hour Good Friday service where we reflected for a bit on the significance of this week and the importance of the Messiah, a theme that also seemed to fit well with our upcoming Passover Seder.

Before dinner, we started with a family friendly iced drink called “Tea of Reeds”. This was a mix of lemongrass tea with mango and basil. It was very good and so easy to make, we had plenty to share throughout the evening. For the adults (i.e. mom & dad), had the “Red Sea Sour” with a Manischewitz reduction syrup, lemon juice, and gin (which is copper distilled and therefore not non-kosher). I set the table for dinner, including glasses for wine (and juice for the kids), and glasses for water. The Seder plate was included in my Days subscription box and became the centerpiece for our meal. We even marked special glasses for Elijah and Miriam, prophets in ancient Israel.

This experience of Passover was an iterative process, we learned together by doing. No one prepared by reading through the Haggadah beforehand. We just moved forward one step at a time. When it was time for dinner, we sat down together and opened the Haggadah and began reading, pouring wine, and praying and drinking as instructed. We understood a little because of our Christian background, but we didn’t understand everything. We wondered why you lean to the left when drinking after the blessings. I think it is to show a reclining and comfortable posture. The Passover is meant to be a celebration after all. We all experience the Seder plate together, dipping our bitter herbs and crackers into salt water to experience the salty taste of sweat and tears meant to represent the suffering of those in oppressive circumstances. We read the story and remembered the pain and struggle, thinking always about those who still live under such oppression as well as those freed. An important part of the Seder is that the youngest child asks Ma Nishtana, the 4 questions. Apparently, there is a song to recall the questions, and we played it together online, then my daughter read the four questions.

We read about the glorious redemption and salvation of slaves by the hand of God in a series of miracles. We recognized God’s great compassion and beheld unwavering trust in God’s grace and desire to deliver the oppressed from the hands of their oppressors. And when all that had been read and heard, then it was time to eat. The three-course meal was prepared and brought out and we all ate until we were very, very full. Up to that point, we had been served 2 of the 4 glasses of wine to be had throughout the Seder. The kids then got up to find the Afikoman, which we hid earlier (and not very well, because they found it in a matter of seconds). More readings, more blessings and prayers, and more wine after the meal. A glass of wine was poured for Elijah, and a glass of water of Miriam, who nurtured the Israelites. We all had a piece of the Afikoman matzo before saying the final blessing and drinking the final glass of wine.

After the Passover proper, the Days booklet included a couple of “Passover Songs”. We knew nothing of the tradition, so we keep passing the book around and took turns singing/rapping/reading the verses. The first song was a serial folksong called Echad Mi Yodea, “One, Who Knows?”. The song was lengthy and included elements from the Passover story of the Exodus. It reminded us of the style of “The Twelve Days of Christmas”. We laughed and had fun with it. After our dinner, I found a proper rendition of Echad Mi Yodea in Hebrew. The second (and final) song was Chad Gadya, “Only One Kid”. It was about a little goat. I later discovered it was a Yiddish lullaby usually sung at the end of Passover. You can hear a rendition of Chad Gadya, which sounds nothing like the performance my daughter invented on the night of our meal.

The Passover Seder was completed and we found ourselves, a family of four, sitting together, happy and well-fed on a Friday night. We were warm and in good humor. There had been some pious moments of reflection during the meal, but the experience as a whole enriched us because we went through it all together, experiencing and discovering this tradition. I asked my teenagers (15,17) about their experience. Would they ever want to do this again? YES! They both answered. They appreciated the ceremony and the time together and they asked me what the next holiday would be like. I don’t know. It is Lag B’Omer, the 49-day period between Passover and Shavuot. I have spent more than a decade studying the Hebrew Bible, but the modern traditions derived from those texts remain a sort of mystery. This is the year I will experience them with my family.

The Passover is a widely recognized Jewish holiday. Just weeks ago, I received notice from a Jewish support organization at the University that they were distributing Passover meals to students who could not be home for the holiday. I also received notice that several Christian friends and colleagues were hosting or participating in Seders that joined Jewish traditions with Christian reflections. I imagine that participating in a large scale Passover Seder (like at a synagogue or a church) could become tedious and ceremonious, and there is a place for these kinds of recognitions. But in a small setting, like with my family, around our dining room table, the Passover Seder was a relaxed and reflective occasion. We read the Haggadah, and commented on the bitter foods and the wine together. We laughed and joked, and we reflected on which kind of ‘child’ we are … the one who asks questions, or the one who shrinks to the background. Also, coming from a conservative, Christian background, the Jewish tradition of drinking wine as a central part of the ceremony and fellowship seems foreign. A former University student said it best when he explained what it was like for him as a person raised in a Jewish home to attend his friend’s Christian church. He said he felt there was a lot similar, but for a severe lack of food, eating, and drinking together!